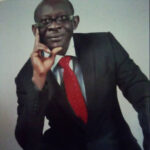 Brief About a Member of the Management Team

Mr. Ndubuisi Henry Amarachi joined the services of the National Theatre in 1997 after obtaining a Bachelor’s Degree (BA) in Theatre Arts in 1995 from University of Port-Harcourt and later a Post Graduate Diploma (PGD) in Cultural Administration at the Institute of Cultural Orientation (NICO) in 2009. Since then, with dint of hard work and commitment, he grew through the ladder and occupied some strategic positions before his elevation to Acting Head of Marketing Department in 2021.

He has held positions such as: General supervisor of Halls, Box Office Manager and Zonal Marketing Head, Northeastern Nigeria.

Since the emergence of Mr. Ndubuisi Henry Amarachi as Head of Marketing Department, it is on record that the revenue profile of the National Theatre has increased tremendously. This success is attributed to his magic wand in interfacing between the potential clients and the National Theatre Management.

Ndubuisi Henry Amarachi, has great synergy with other members of the management team led by the performing head (Prof Sunday E. Ododo, fsont, fta, fsna, fana, FNAL), the GM/CEO of the National Theatre.

NATIONAL THEATRE - The Complex offers the Venue for all kinds of Programmes & Activities..